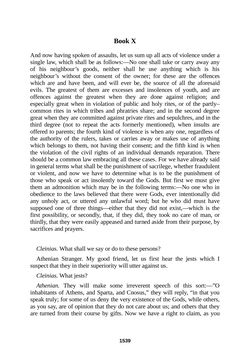 Book X And now having spoken of assaults, let us sum up all acts of violence under a single law, which shall be as follows:—No one shall take or carry away any of his neighbour’s goods, neither shall he use anything which is his neighbour’s without the consent of the owner; for these are the offences which are and have been, and will ever be, the source of all the aforesaid evils. The greatest of them are excesses and insolences of youth, and are offences against the greatest when they are done against religion; and especially great when in violation of public and holy rites, or of the partly– common rites in which tribes and phratries share; and in the second degree great when they are committed against private rites and sepulchres, and in the third degree (not to repeat the acts formerly mentioned), when insults are offered to parents; the fourth kind of violence is when any one, regardless of the authority of the rulers, takes or carries away or makes use of anything which belongs to them, not having their consent; and the fifth kind is when the violation of the civil rights of an individual demands reparation. There should be a common law embracing all these cases. For we have already said in general terms what shall be the punishment of sacrilege, whether fraudulent or violent, and now we have to determine what is to be the punishment of those who speak or act insolently toward the Gods. But first we must give them an admonition which may be in the following terms:—No one who in obedience to the laws believed that there were Gods, ever intentionally did any unholy act, or uttered any unlawful word; but he who did must have supposed one of three things—either that they did not exist,—which is the first possibility, or secondly, that, if they did, they took no care of man, or thirdly, that they were easily appeased and turned aside from their purpose, by sacrifices and prayers. Cleinias. What shall we say or do to these persons? Athenian Stranger. My good friend, let us first hear the jests which I suspect that they in their superiority will utter against us. Cleinias. What jests? Athenian. They will make some irreverent speech of this sort:—”O inhabitants of Athens, and Sparta, and Cnosus,” they will reply, “in that you speak truly; for some of us deny the very existence of the Gods, while others, as you say, are of opinion that they do not care about us; and others that they are turned from their course by gifts. Now we have a right to claim, as you 1539
zurück zum  Buch The Complete Plato"
The Complete Plato