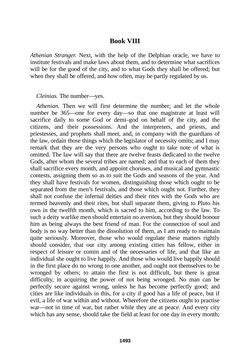 Book VIII Athenian Stranger. Next, with the help of the Delphian oracle, we have to institute festivals and make laws about them, and to determine what sacrifices will be for the good of the city, and to what Gods they shall be offered; but when they shall be offered, and how often, may be partly regulated by us. Cleinias. The number—yes. Athenian. Then we will first determine the number; and let the whole number be 365—one for every day—so that one magistrate at least will sacrifice daily to some God or demi–god on behalf of the city, and the citizens, and their possessions. And the interpreters, and priests, and priestesses, and prophets shall meet, and, in company with the guardians of the law, ordain those things which the legislator of necessity omits; and I may remark that they are the very persons who ought to take note of what is omitted. The law will say that there are twelve feasts dedicated to the twelve Gods, after whom the several tribes are named; and that to each of them they shall sacrifice every month, and appoint choruses, and musical and gymnastic contests, assigning them so as to suit the Gods and seasons of the year. And they shall have festivals for women, distinguishing those which ought to be separated from the men’s festivals, and those which ought not. Further, they shall not confuse the infernal deities and their rites with the Gods who are termed heavenly and their rites, but shall separate them, giving to Pluto his own in the twelfth month, which is sacred to him, according to the law. To such a deity warlike men should entertain no aversion, but they should honour him as being always the best friend of man. For the connection of soul and body is no way better than the dissolution of them, as I am ready to maintain quite seriously. Moreover, those who would regulate these matters rightly should consider, that our city among existing cities has fellow, either in respect of leisure or comin and of the necessaries of life, and that like an individual she ought to live happily. And those who would live happily should in the first place do no wrong to one another, and ought not themselves to be wronged by others; to attain the first is not difficult, but there is great difficulty, in acquiring the power of not being wronged. No man can be perfectly secure against wrong, unless he has become perfectly good; and cities are like individuals in this, for a city if good has a life of peace, but if evil, a life of war within and without. Wherefore the citizens ought to practise war—not in time of war, but rather while they are at peace. And every city which has any sense, should take the field at least for one day in every month; 1493
zurück zum  Buch The Complete Plato"
The Complete Plato