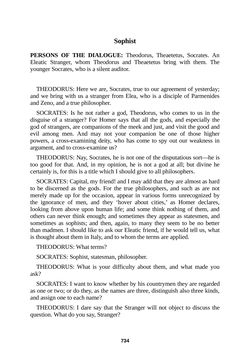 Sophist PERSONS OF THE DIALOGUE: Theodorus, Theaetetus, Socrates. An Eleatic Stranger, whom Theodorus and Theaetetus bring with them. The younger Socrates, who is a silent auditor. THEODORUS: Here we are, Socrates, true to our agreement of yesterday; and we bring with us a stranger from Elea, who is a disciple of Parmenides and Zeno, and a true philosopher. SOCRATES: Is he not rather a god, Theodorus, who comes to us in the disguise of a stranger? For Homer says that all the gods, and especially the god of strangers, are companions of the meek and just, and visit the good and evil among men. And may not your companion be one of those higher powers, a cross-examining deity, who has come to spy out our weakness in argument, and to cross-examine us? THEODORUS: Nay, Socrates, he is not one of the disputatious sort—he is too good for that. And, in my opinion, he is not a god at all; but divine he certainly is, for this is a title which I should give to all philosophers. SOCRATES: Capital, my friend! and I may add that they are almost as hard to be discerned as the gods. For the true philosophers, and such as are not merely made up for the occasion, appear in various forms unrecognized by the ignorance of men, and they ‘hover about cities,’ as Homer declares, looking from above upon human life; and some think nothing of them, and others can never think enough; and sometimes they appear as statesmen, and sometimes as sophists; and then, again, to many they seem to be no better than madmen. I should like to ask our Eleatic friend, if he would tell us, what is thought about them in Italy, and to whom the terms are applied. THEODORUS: What terms? SOCRATES: Sophist, statesman, philosopher. THEODORUS: What is your difficulty about them, and what made you ask? SOCRATES: I want to know whether by his countrymen they are regarded as one or two; or do they, as the names are three, distinguish also three kinds, and assign one to each name? THEODORUS: I dare say that the Stranger will not object to discuss the question. What do you say, Stranger? 734
zurück zum  Buch The Complete Plato"
The Complete Plato