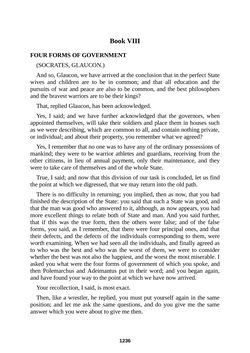 Book VIII FOUR FORMS OF GOVERNMENT (SOCRATES, GLAUCON.) And so, Glaucon, we have arrived at the conclusion that in the perfect State wives and children are to be in common; and that all education and the pursuits of war and peace are also to be common, and the best philosophers and the bravest warriors are to be their kings? That, replied Glaucon, has been acknowledged. Yes, I said; and we have further acknowledged that the governors, when appointed themselves, will take their soldiers and place them in houses such as we were describing, which are common to all, and contain nothing private, or individual; and about their property, you remember what we agreed? Yes, I remember that no one was to have any of the ordinary possessions of mankind; they were to be warrior athletes and guardians, receiving from the other citizens, in lieu of annual payment, only their maintenance, and they were to take care of themselves and of the whole State. True, I said; and now that this division of our task is concluded, let us find the point at which we digressed, that we may return into the old path. There is no difficulty in returning; you implied, then as now, that you had finished the description of the State: you said that such a State was good, and that the man was good who answered to it, although, as now appears, you had more excellent things to relate both of State and man. And you said further, that if this was the true form, then the others were false; and of the false forms, you said, as I remember, that there were four principal ones, and that their defects, and the defects of the individuals corresponding to them, were worth examining. When we had seen all the individuals, and finally agreed as to who was the best and who was the worst of them, we were to consider whether the best was not also the happiest, and the worst the most miserable. I asked you what were the four forms of government of which you spoke, and then Polemarchus and Adeimantus put in their word; and you began again, and have found your way to the point at which we have now arrived. Your recollection, I said, is most exact. Then, like a wrestler, he replied, you must put yourself again in the same position; and let me ask the same questions, and do you give me the same answer which you were about to give me then. 1236
zurück zum  Buch The Complete Plato"
The Complete Plato