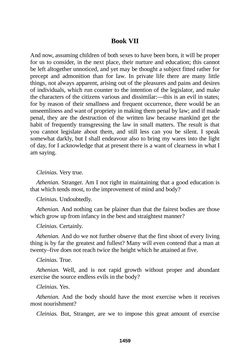 Book VII And now, assuming children of both sexes to have been born, it will be proper for us to consider, in the next place, their nurture and education; this cannot be left altogether unnoticed, and yet may be thought a subject fitted rather for precept and admonition than for law. In private life there are many little things, not always apparent, arising out of the pleasures and pains and desires of individuals, which run counter to the intention of the legislator, and make the characters of the citizens various and dissimilar:—this is an evil in states; for by reason of their smallness and frequent occurrence, there would be an unseemliness and want of propriety in making them penal by law; and if made penal, they are the destruction of the written law because mankind get the habit of frequently transgressing the law in small matters. The result is that you cannot legislate about them, and still less can you be silent. I speak somewhat darkly, but I shall endeavour also to bring my wares into the light of day, for I acknowledge that at present there is a want of clearness in what I am saying. Cleinias. Very true. Athenian. Stranger. Am I not right in maintaining that a good education is that which tends most, to the improvement of mind and body? Cleinias. Undoubtedly. Athenian. And nothing can be plainer than that the fairest bodies are those which grow up from infancy in the best and straightest manner? Cleinias. Certainly. Athenian. And do we not further observe that the first shoot of every living thing is by far the greatest and fullest? Many will even contend that a man at twenty–five does not reach twice the height which he attained at five. Cleinias. True. Athenian. Well, and is not rapid growth without proper and abundant exercise the source endless evils in the body? Cleinias. Yes. Athenian. And the body should have the most exercise when it receives most nourishment? Cleinias. But, Stranger, are we to impose this great amount of exercise 1459
zurück zum  Buch The Complete Plato"
The Complete Plato