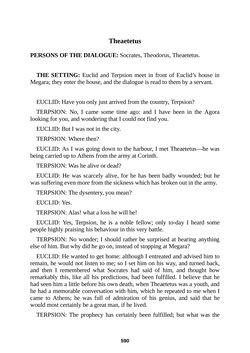 Theaetetus PERSONS OF THE DIALOGUE: Socrates, Theodorus, Theaetetus. THE SETTING: Euclid and Terpsion meet in front of Euclid’s house in Megara; they enter the house, and the dialogue is read to them by a servant. EUCLID: Have you only just arrived from the country, Terpsion? TERPSION: No, I came some time ago: and I have been in the Agora looking for you, and wondering that I could not find you. EUCLID: But I was not in the city. TERPSION: Where then? EUCLID: As I was going down to the harbour, I met Theaetetus—he was being carried up to Athens from the army at Corinth. TERPSION: Was he alive or dead? EUCLID: He was scarcely alive, for he has been badly wounded; but he was suffering even more from the sickness which has broken out in the army. TERPSION: The dysentery, you mean? EUCLID: Yes. TERPSION: Alas! what a loss he will be! EUCLID: Yes, Terpsion, he is a noble fellow; only to-day I heard some people highly praising his behaviour in this very battle. TERPSION: No wonder; I should rather be surprised at hearing anything else of him. But why did he go on, instead of stopping at Megara? EUCLID: He wanted to get home: although I entreated and advised him to remain, he would not listen to me; so I set him on his way, and turned back, and then I remembered what Socrates had said of him, and thought how remarkably this, like all his predictions, had been fulfilled. I believe that he had seen him a little before his own death, when Theaetetus was a youth, and he had a memorable conversation with him, which he repeated to me when I came to Athens; he was full of admiration of his genius, and said that he would most certainly be a great man, if he lived. TERPSION: The prophecy has certainly been fulfilled; but what was the 590
zurück zum  Buch The Complete Plato"
The Complete Plato