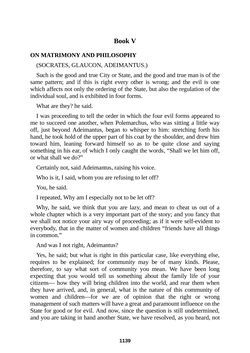 Book V ON MATRIMONY AND PHILOSOPHY (SOCRATES, GLAUCON, ADEIMANTUS.) Such is the good and true City or State, and the good and true man is of the same pattern; and if this is right every other is wrong; and the evil is one which affects not only the ordering of the State, but also the regulation of the individual soul, and is exhibited in four forms. What are they? he said. I was proceeding to tell the order in which the four evil forms appeared to me to succeed one another, when Polemarchus, who was sitting a little way off, just beyond Adeimantus, began to whisper to him: stretching forth his hand, he took hold of the upper part of his coat by the shoulder, and drew him toward him, leaning forward himself so as to be quite close and saying something in his ear, of which I only caught the words, “Shall we let him off, or what shall we do?” Certainly not, said Adeimantus, raising his voice. Who is it, I said, whom you are refusing to let off? You, he said. I repeated, Why am I especially not to be let off? Why, he said, we think that you are lazy, and mean to cheat us out of a whole chapter which is a very important part of the story; and you fancy that we shall not notice your airy way of proceeding; as if it were self-evident to everybody, that in the matter of women and children “friends have all things in common.” And was I not right, Adeimantus? Yes, he said; but what is right in this particular case, like everything else, requires to be explained; for community may be of many kinds. Please, therefore, to say what sort of community you mean. We have been long expecting that you would tell us something about the family life of your citizens— how they will bring children into the world, and rear them when they have arrived, and, in general, what is the nature of this community of women and children—for we are of opinion that the right or wrong management of such matters will have a great and paramount influence on the State for good or for evil. And now, since the question is still undetermined, and you are taking in hand another State, we have resolved, as you heard, not 1139
zurück zum  Buch The Complete Plato"
The Complete Plato