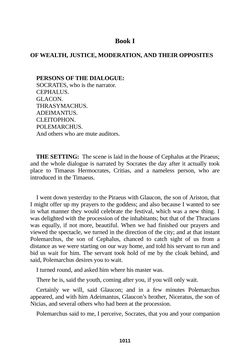 Book I OF WEALTH, JUSTICE, MODERATION, AND THEIR OPPOSITES PERSONS OF THE DIALOGUE: SOCRATES, who is the narrator. CEPHALUS. GLACON. THRASYMACHUS. ADEIMANTUS. CLEITOPHON. POLEMARCHUS. And others who are mute auditors. THE SETTING: The scene is laid in the house of Cephalus at the Piraeus; and the whole dialogue is narrated by Socrates the day after it actually took place to Timaeus Hermocrates, Critias, and a nameless person, who are introduced in the Timaeus. I went down yesterday to the Piraeus with Glaucon, the son of Ariston, that I might offer up my prayers to the goddess; and also because I wanted to see in what manner they would celebrate the festival, which was a new thing. I was delighted with the procession of the inhabitants; but that of the Thracians was equally, if not more, beautiful. When we had finished our prayers and viewed the spectacle, we turned in the direction of the city; and at that instant Polemarchus, the son of Cephalus, chanced to catch sight of us from a distance as we were starting on our way home, and told his servant to run and bid us wait for him. The servant took hold of me by the cloak behind, and said, Polemarchus desires you to wait. I turned round, and asked him where his master was. There he is, said the youth, coming after you, if you will only wait. Certainly we will, said Glaucon; and in a few minutes Polemarchus appeared, and with him Adeimantus, Glaucon’s brother, Niceratus, the son of Nicias, and several others who had been at the procession. Polemarchus said to me, I perceive, Socrates, that you and your companion 1011
zurück zum  Buch The Complete Plato"
The Complete Plato