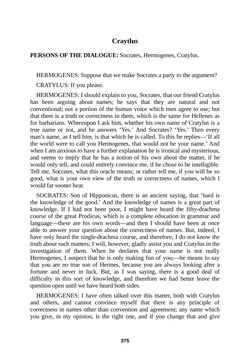 Craytlus PERSONS OF THE DIALOGUE: Socrates, Hermogenes, Cratylus. HERMOGENES: Suppose that we make Socrates a party to the argument? CRATYLUS: If you please. HERMOGENES: I should explain to you, Socrates, that our friend Cratylus has been arguing about names; he says that they are natural and not conventional; not a portion of the human voice which men agree to use; but that there is a truth or correctness in them, which is the same for Hellenes as for barbarians. Whereupon I ask him, whether his own name of Cratylus is a true name or not, and he answers ‘Yes.’ And Socrates? ‘Yes.’ Then every man’s name, as I tell him, is that which he is called. To this he replies—‘If all the world were to call you Hermogenes, that would not be your name.’ And when I am anxious to have a further explanation he is ironical and mysterious, and seems to imply that he has a notion of his own about the matter, if he would only tell, and could entirely convince me, if he chose to be intelligible. Tell me, Socrates, what this oracle means; or rather tell me, if you will be so good, what is your own view of the truth or correctness of names, which I would far sooner hear. SOCRATES: Son of Hipponicus, there is an ancient saying, that ‘hard is the knowledge of the good.’ And the knowledge of names is a great part of knowledge. If I had not been poor, I might have heard the fifty-drachma course of the great Prodicus, which is a complete education in grammar and language—these are his own words—and then I should have been at once able to answer your question about the correctness of names. But, indeed, I have only heard the single-drachma course, and therefore, I do not know the truth about such matters; I will, however, gladly assist you and Cratylus in the investigation of them. When he declares that your name is not really Hermogenes, I suspect that he is only making fun of you;—he means to say that you are no true son of Hermes, because you are always looking after a fortune and never in luck. But, as I was saying, there is a good deal of difficulty in this sort of knowledge, and therefore we had better leave the question open until we have heard both sides. HERMOGENES: I have often talked over this matter, both with Cratylus and others, and cannot convince myself that there is any principle of correctness in names other than convention and agreement; any name which you give, in my opinion, is the right one, and if you change that and give 375
zurück zum  Buch The Complete Plato"
The Complete Plato