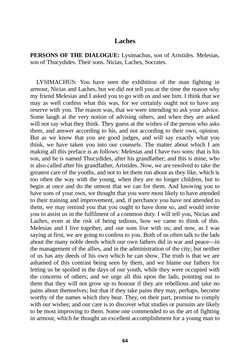 Laches PERSONS OF THE DIALOGUE: Lysimachus, son of Aristides. Melesias, son of Thucydides. Their sons. Nicias, Laches, Socrates. LYSIMACHUS: You have seen the exhibition of the man fighting in armour, Nicias and Laches, but we did not tell you at the time the reason why my friend Melesias and I asked you to go with us and see him. I think that we may as well confess what this was, for we certainly ought not to have any reserve with you. The reason was, that we were intending to ask your advice. Some laugh at the very notion of advising others, and when they are asked will not say what they think. They guess at the wishes of the person who asks them, and answer according to his, and not according to their own, opinion. But as we know that you are good judges, and will say exactly what you think, we have taken you into our counsels. The matter about which I am making all this preface is as follows: Melesias and I have two sons; that is his son, and he is named Thucydides, after his grandfather; and this is mine, who is also called after his grandfather, Aristides. Now, we are resolved to take the greatest care of the youths, and not to let them run about as they like, which is too often the way with the young, when they are no longer children, but to begin at once and do the utmost that we can for them. And knowing you to have sons of your own, we thought that you were most likely to have attended to their training and improvement, and, if perchance you have not attended to them, we may remind you that you ought to have done so, and would invite you to assist us in the fulfilment of a common duty. I will tell you, Nicias and Laches, even at the risk of being tedious, how we came to think of this. Melesias and I live together, and our sons live with us; and now, as I was saying at first, we are going to confess to you. Both of us often talk to the lads about the many noble deeds which our own fathers did in war and peace—in the management of the allies, and in the administration of the city; but neither of us has any deeds of his own which he can show. The truth is that we are ashamed of this contrast being seen by them, and we blame our fathers for letting us be spoiled in the days of our youth, while they were occupied with the concerns of others; and we urge all this upon the lads, pointing out to them that they will not grow up to honour if they are rebellious and take no pains about themselves; but that if they take pains they may, perhaps, become worthy of the names which they bear. They, on their part, promise to comply with our wishes; and our care is to discover what studies or pursuits are likely to be most improving to them. Some one commended to us the art of fighting in armour, which he thought an excellent accomplishment for a young man to 64
zurück zum  Buch The Complete Plato"
The Complete Plato