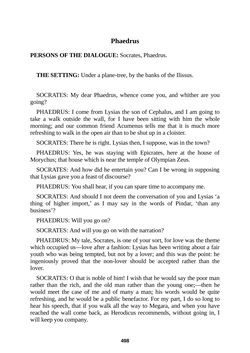 Phaedrus PERSONS OF THE DIALOGUE: Socrates, Phaedrus. THE SETTING: Under a plane-tree, by the banks of the Ilissus. SOCRATES: My dear Phaedrus, whence come you, and whither are you going? PHAEDRUS: I come from Lysias the son of Cephalus, and I am going to take a walk outside the wall, for I have been sitting with him the whole morning; and our common friend Acumenus tells me that it is much more refreshing to walk in the open air than to be shut up in a cloister. SOCRATES: There he is right. Lysias then, I suppose, was in the town? PHAEDRUS: Yes, he was staying with Epicrates, here at the house of Morychus; that house which is near the temple of Olympian Zeus. SOCRATES: And how did he entertain you? Can I be wrong in supposing that Lysias gave you a feast of discourse? PHAEDRUS: You shall hear, if you can spare time to accompany me. SOCRATES: And should I not deem the conversation of you and Lysias ‘a thing of higher import,’ as I may say in the words of Pindar, ‘than any business’? PHAEDRUS: Will you go on? SOCRATES: And will you go on with the narration? PHAEDRUS: My tale, Socrates, is one of your sort, for love was the theme which occupied us—love after a fashion: Lysias has been writing about a fair youth who was being tempted, but not by a lover; and this was the point: he ingeniously proved that the non-lover should be accepted rather than the lover. SOCRATES: O that is noble of him! I wish that he would say the poor man rather than the rich, and the old man rather than the young one;—then he would meet the case of me and of many a man; his words would be quite refreshing, and he would be a public benefactor. For my part, I do so long to hear his speech, that if you walk all the way to Megara, and when you have reached the wall come back, as Herodicus recommends, without going in, I will keep you company. 498
zurück zum  Buch The Complete Plato"
The Complete Plato