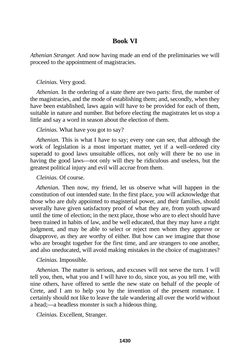 Book VI Athenian Stranger. And now having made an end of the preliminaries we will proceed to the appointment of magistracies. Cleinias. Very good. Athenian. In the ordering of a state there are two parts: first, the number of the magistracies, and the mode of establishing them; and, secondly, when they have been established, laws again will have to be provided for each of them, suitable in nature and number. But before electing the magistrates let us stop a little and say a word in season about the election of them. Cleinias. What have you got to say? Athenian. This is what I have to say; every one can see, that although the work of legislation is a most important matter, yet if a well–ordered city superadd to good laws unsuitable offices, not only will there be no use in having the good laws—not only will they be ridiculous and useless, but the greatest political injury and evil will accrue from them. Cleinias. Of course. Athenian. Then now, my friend, let us observe what will happen in the constitution of out intended state. In the first place, you will acknowledge that those who are duly appointed to magisterial power, and their families, should severally have given satisfactory proof of what they are, from youth upward until the time of election; in the next place, those who are to elect should have been trained in habits of law, and be well educated, that they may have a right judgment, and may be able to select or reject men whom they approve or disapprove, as they are worthy of either. But how can we imagine that those who are brought together for the first time, and are strangers to one another, and also uneducated, will avoid making mistakes in the choice of magistrates? Cleinias. Impossible. Athenian. The matter is serious, and excuses will not serve the turn. I will tell you, then, what you and I will have to do, since you, as you tell me, with nine others, have offered to settle the new state on behalf of the people of Crete, and I am to help you by the invention of the present romance. I certainly should not like to leave the tale wandering all over the world without a head;—a headless monster is such a hideous thing. Cleinias. Excellent, Stranger. 1430
zurück zum  Buch The Complete Plato"
The Complete Plato