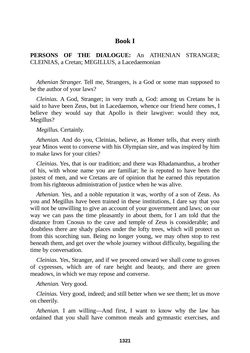 Book I PERSONS OF THE DIALOGUE: An ATHENIAN STRANGER; CLEINIAS, a Cretan; MEGILLUS, a Lacedaemonian Athenian Stranger. Tell me, Strangers, is a God or some man supposed to be the author of your laws? Cleinias. A God, Stranger; in very truth a, God: among us Cretans he is said to have been Zeus, but in Lacedaemon, whence our friend here comes, I believe they would say that Apollo is their lawgiver: would they not, Megillus? Megillus. Certainly. Athenian. And do you, Cleinias, believe, as Homer tells, that every ninth year Minos went to converse with his Olympian sire, and was inspired by him to make laws for your cities? Cleinias. Yes, that is our tradition; and there was Rhadamanthus, a brother of his, with whose name you are familiar; he is reputed to have been the justest of men, and we Cretans are of opinion that he earned this reputation from his righteous administration of justice when he was alive. Athenian. Yes, and a noble reputation it was, worthy of a son of Zeus. As you and Megillus have been trained in these institutions, I dare say that you will not be unwilling to give an account of your government and laws; on our way we can pass the time pleasantly in about them, for I am told that the distance from Cnosus to the cave and temple of Zeus is considerable; and doubtless there are shady places under the lofty trees, which will protect us from this scorching sun. Being no longer young, we may often stop to rest beneath them, and get over the whole journey without difficulty, beguiling the time by conversation. Cleinias. Yes, Stranger, and if we proceed onward we shall come to groves of cypresses, which are of rare height and beauty, and there are green meadows, in which we may repose and converse. Athenian. Very good. Cleinias. Very good, indeed; and still better when we see them; let us move on cheerily. Athenian. I am willing—And first, I want to know why the law has ordained that you shall have common meals and gymnastic exercises, and 1321
zurück zum  Buch The Complete Plato"
The Complete Plato