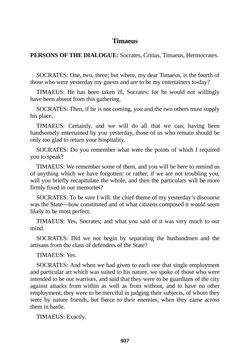 Timaeus PERSONS OF THE DIALOGUE: Socrates, Critias, Timaeus, Hermocrates. SOCRATES: One, two, three; but where, my dear Timaeus, is the fourth of those who were yesterday my guests and are to be my entertainers to-day? TIMAEUS: He has been taken ill, Socrates; for he would not willingly have been absent from this gathering. SOCRATES: Then, if he is not coming, you and the two others must supply his place. TIMAEUS: Certainly, and we will do all that we can; having been handsomely entertained by you yesterday, those of us who remain should be only too glad to return your hospitality. SOCRATES: Do you remember what were the points of which I required you to speak? TIMAEUS: We remember some of them, and you will be here to remind us of anything which we have forgotten: or rather, if we are not troubling you, will you briefly recapitulate the whole, and then the particulars will be more firmly fixed in our memories? SOCRATES: To be sure I will: the chief theme of my yesterday’s discourse was the State—how constituted and of what citizens composed it would seem likely to be most perfect. TIMAEUS: Yes, Socrates; and what you said of it was very much to our mind. SOCRATES: Did we not begin by separating the husbandmen and the artisans from the class of defenders of the State? TIMAEUS: Yes. SOCRATES: And when we had given to each one that single employment and particular art which was suited to his nature, we spoke of those who were intended to be our warriors, and said that they were to be guardians of the city against attacks from within as well as from without, and to have no other employment; they were to be merciful in judging their subjects, of whom they were by nature friends, but fierce to their enemies, when they came across them in battle. TIMAEUS: Exactly. 937
zurück zum  Buch The Complete Plato"
The Complete Plato