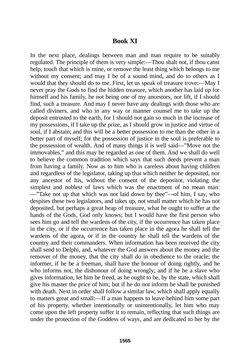 Book XI In the next place, dealings between man and man require to be suitably regulated. The principle of them is very simple:—Thou shalt not, if thou canst help, touch that which is mine, or remove the least thing which belongs to me without my consent; and may I be of a sound mind, and do to others as I would that they should do to me. First, let us speak of treasure trove:—May I never pray the Gods to find the hidden treasure, which another has laid up for himself and his family, he not being one of my ancestors, nor lift, if I should find, such a treasure. And may I never have any dealings with those who are called diviners, and who in any way or manner counsel me to take up the deposit entrusted to the earth, for I should not gain so much in the increase of my possessions, if I take up the prize, as I should grow in justice and virtue of soul, if I abstain; and this will be a better possession to me than the other in a better part of myself; for the possession of justice in the soul is preferable to the possession of wealth. And of many things it is well said—”Move not the immovables,” and this may be regarded as one of them. And we shall do well to believe the common tradition which says that such deeds prevent a man from having a family. Now as to him who is careless about having children and regardless of the legislator, taking up that which neither he deposited, nor any ancestor of his, without the consent of the depositor, violating the simplest and noblest of laws which was the enactment of no mean man: —”Take not up that which was not laid down by thee”—of him, I say, who despises these two legislators, and takes up, not small matter which he has not deposited, but perhaps a great heap of treasure, what he ought to suffer at the hands of the Gods, God only knows; but I would have the first person who sees him go and tell the wardens of the city, if the occurrence has taken place in the city, or if the occurrence has taken place in the agora he shall tell the wardens of the agora, or if in the country he shall tell the wardens of the country and their commanders. When information has been received the city shall send to Delphi, and, whatever the God answers about the money and the remover of the money, that the city shall do in obedience to the oracle; the informer, if he be a freeman, shall have the honour of doing rightly, and he who informs not, the dishonour of doing wrongly; and if he be a slave who gives information, let him be freed, as he ought to be, by the state, which shall give his master the price of him; but if he do not inform he shall be punished with death. Next in order shall follow a similar law, which shall apply equally to matters great and small:—If a man happens to leave behind him some part of his property, whether intentionally or unintentionally, let him who may come upon the left property suffer it to remain, reflecting that such things are under the protection of the Goddess of ways, and are dedicated to her by the 1565
zurück zum  Buch The Complete Plato"
The Complete Plato