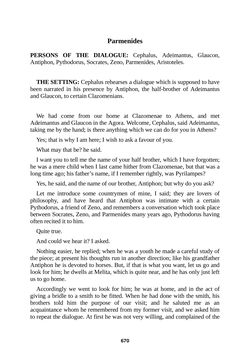 Parmenides PERSONS OF THE DIALOGUE: Cephalus, Adeimantus, Glaucon, Antiphon, Pythodorus, Socrates, Zeno, Parmenides, Aristoteles. THE SETTING: Cephalus rehearses a dialogue which is supposed to have been narrated in his presence by Antiphon, the half-brother of Adeimantus and Glaucon, to certain Clazomenians. We had come from our home at Clazomenae to Athens, and met Adeimantus and Glaucon in the Agora. Welcome, Cephalus, said Adeimantus, taking me by the hand; is there anything which we can do for you in Athens? Yes; that is why I am here; I wish to ask a favour of you. What may that be? he said. I want you to tell me the name of your half brother, which I have forgotten; he was a mere child when I last came hither from Clazomenae, but that was a long time ago; his father’s name, if I remember rightly, was Pyrilampes? Yes, he said, and the name of our brother, Antiphon; but why do you ask? Let me introduce some countrymen of mine, I said; they are lovers of philosophy, and have heard that Antiphon was intimate with a certain Pythodorus, a friend of Zeno, and remembers a conversation which took place between Socrates, Zeno, and Parmenides many years ago, Pythodorus having often recited it to him. Quite true. And could we hear it? I asked. Nothing easier, he replied; when he was a youth he made a careful study of the piece; at present his thoughts run in another direction; like his grandfather Antiphon he is devoted to horses. But, if that is what you want, let us go and look for him; he dwells at Melita, which is quite near, and he has only just left us to go home. Accordingly we went to look for him; he was at home, and in the act of giving a bridle to a smith to be fitted. When he had done with the smith, his brothers told him the purpose of our visit; and he saluted me as an acquaintance whom he remembered from my former visit, and we asked him to repeat the dialogue. At first he was not very willing, and complained of the 670
zurück zum  Buch The Complete Plato"
The Complete Plato