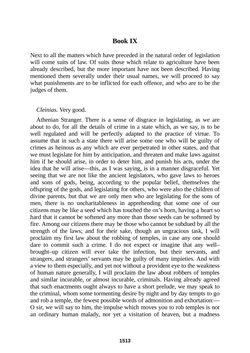 Book IX Next to all the matters which have preceded in the natural order of legislation will come suits of law. Of suits those which relate to agriculture have been already described, but the more important have not been described. Having mentioned them severally under their usual names, we will proceed to say what punishments are to be inflicted for each offence, and who are to be the judges of them. Cleinias. Very good. Athenian Stranger. There is a sense of disgrace in legislating, as we are about to do, for all the details of crime in a state which, as we say, is to be well regulated and will be perfectly adapted to the practice of virtue. To assume that in such a state there will arise some one who will be guilty of crimes as heinous as any which are ever perpetrated in other states, and that we must legislate for him by anticipation, and threaten and make laws against him if he should arise, in order to deter him, and punish his acts, under the idea that he will arise—this, as I was saying, is in a manner disgraceful. Yet seeing that we are not like the ancient legislators, who gave laws to heroes and sons of gods, being, according to the popular belief, themselves the offspring of the gods, and legislating for others, who were also the children of divine parents, but that we are only men who are legislating for the sons of men, there is no uncharitableness in apprehending that some one of our citizens may be like a seed which has touched the ox’s horn, having a heart so hard that it cannot be softened any more than those seeds can be softened by fire. Among our citizens there may be those who cannot be subdued by all the strength of the laws; and for their sake, though an ungracious task, I will proclaim my first law about the robbing of temples, in case any one should dare to commit such a crime. I do not expect or imagine that any well– brought–up citizen will ever take the infection, but their servants, and strangers, and strangers’ servants may be guilty of many impieties. And with a view to them especially, and yet not without a provident eye to the weakness of human nature generally, I will proclaim the law about robbers of temples and similar incurable, or almost incurable, criminals. Having already agreed that such enactments ought always to have a short prelude, we may speak to the criminal, whom some tormenting desire by night and by day tempts to go and rob a temple, the fewest possible words of admonition and exhortation:— O sir, we will say to him, the impulse which moves you to rob temples is not an ordinary human malady, nor yet a visitation of heaven, but a madness 1513
zurück zum  Buch The Complete Plato"
The Complete Plato