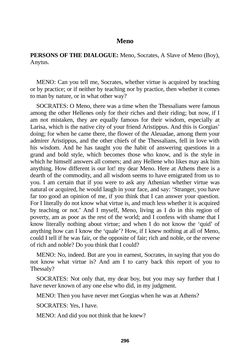 Meno PERSONS OF THE DIALOGUE: Meno, Socrates, A Slave of Meno (Boy), Anytus. MENO: Can you tell me, Socrates, whether virtue is acquired by teaching or by practice; or if neither by teaching nor by practice, then whether it comes to man by nature, or in what other way? SOCRATES: O Meno, there was a time when the Thessalians were famous among the other Hellenes only for their riches and their riding; but now, if I am not mistaken, they are equally famous for their wisdom, especially at Larisa, which is the native city of your friend Aristippus. And this is Gorgias’ doing; for when he came there, the flower of the Aleuadae, among them your admirer Aristippus, and the other chiefs of the Thessalians, fell in love with his wisdom. And he has taught you the habit of answering questions in a grand and bold style, which becomes those who know, and is the style in which he himself answers all comers; and any Hellene who likes may ask him anything. How different is our lot! my dear Meno. Here at Athens there is a dearth of the commodity, and all wisdom seems to have emigrated from us to you. I am certain that if you were to ask any Athenian whether virtue was natural or acquired, he would laugh in your face, and say: ‘Stranger, you have far too good an opinion of me, if you think that I can answer your question. For I literally do not know what virtue is, and much less whether it is acquired by teaching or not.’ And I myself, Meno, living as I do in this region of poverty, am as poor as the rest of the world; and I confess with shame that I know literally nothing about virtue; and when I do not know the ‘quid’ of anything how can I know the ‘quale’? How, if I knew nothing at all of Meno, could I tell if he was fair, or the opposite of fair; rich and noble, or the reverse of rich and noble? Do you think that I could? MENO: No, indeed. But are you in earnest, Socrates, in saying that you do not know what virtue is? And am I to carry back this report of you to Thessaly? SOCRATES: Not only that, my dear boy, but you may say further that I have never known of any one else who did, in my judgment. MENO: Then you have never met Gorgias when he was at Athens? SOCRATES: Yes, I have. MENO: And did you not think that he knew? 296
zurück zum  Buch The Complete Plato"
The Complete Plato