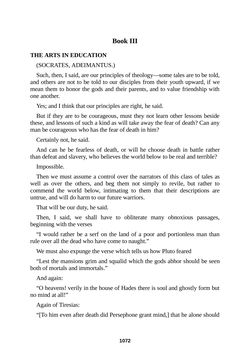 Book III THE ARTS IN EDUCATION (SOCRATES, ADEIMANTUS.) Such, then, I said, are our principles of theology—some tales are to be told, and others are not to be told to our disciples from their youth upward, if we mean them to honor the gods and their parents, and to value friendship with one another. Yes; and I think that our principles are right, he said. But if they are to be courageous, must they not learn other lessons beside these, and lessons of such a kind as will take away the fear of death? Can any man be courageous who has the fear of death in him? Certainly not, he said. And can he be fearless of death, or will he choose death in battle rather than defeat and slavery, who believes the world below to be real and terrible? Impossible. Then we must assume a control over the narrators of this class of tales as well as over the others, and beg them not simply to revile, but rather to commend the world below, intimating to them that their descriptions are untrue, and will do harm to our future warriors. That will be our duty, he said. Then, I said, we shall have to obliterate many obnoxious passages, beginning with the verses “I would rather be a serf on the land of a poor and portionless man than rule over all the dead who have come to naught.” We must also expunge the verse which tells us how Pluto feared “Lest the mansions grim and squalid which the gods abhor should be seen both of mortals and immortals.” And again: “O heavens! verily in the house of Hades there is soul and ghostly form but no mind at all!” Again of Tiresias: “[To him even after death did Persephone grant mind,] that he alone should 1072
zurück zum  Buch The Complete Plato"
The Complete Plato