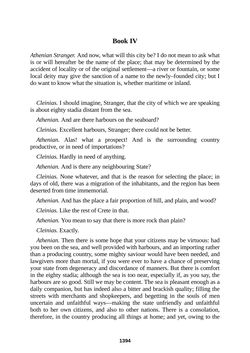 Book IV Athenian Stranger. And now, what will this city be? I do not mean to ask what is or will hereafter be the name of the place; that may be determined by the accident of locality or of the original settlement—a river or fountain, or some local deity may give the sanction of a name to the newly–founded city; but I do want to know what the situation is, whether maritime or inland. Cleinias. I should imagine, Stranger, that the city of which we are speaking is about eighty stadia distant from the sea. Athenian. And are there harbours on the seaboard? Cleinias. Excellent harbours, Stranger; there could not be better. Athenian. Alas! what a prospect! And is the surrounding country productive, or in need of importations? Cleinias. Hardly in need of anything. Athenian. And is there any neighbouring State? Cleinias. None whatever, and that is the reason for selecting the place; in days of old, there was a migration of the inhabitants, and the region has been deserted from time immemorial. Athenian. And has the place a fair proportion of hill, and plain, and wood? Cleinias. Like the rest of Crete in that. Athenian. You mean to say that there is more rock than plain? Cleinias. Exactly. Athenian. Then there is some hope that your citizens may be virtuous: had you been on the sea, and well provided with harbours, and an importing rather than a producing country, some mighty saviour would have been needed, and lawgivers more than mortal, if you were ever to have a chance of preserving your state from degeneracy and discordance of manners. But there is comfort in the eighty stadia; although the sea is too near, especially if, as you say, the harbours are so good. Still we may be content. The sea is pleasant enough as a daily companion, but has indeed also a bitter and brackish quality; filling the streets with merchants and shopkeepers, and begetting in the souls of men uncertain and unfaithful ways—making the state unfriendly and unfaithful both to her own citizens, and also to other nations. There is a consolation, therefore, in the country producing all things at home; and yet, owing to the 1394
zurück zum  Buch The Complete Plato"
The Complete Plato