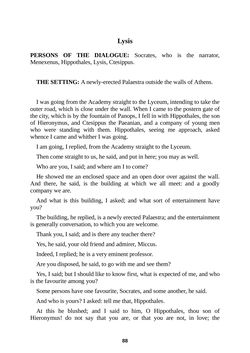 Lysis PERSONS OF THE DIALOGUE: Socrates, who is the narrator, Menexenus, Hippothales, Lysis, Ctesippus. THE SETTING: A newly-erected Palaestra outside the walls of Athens. I was going from the Academy straight to the Lyceum, intending to take the outer road, which is close under the wall. When I came to the postern gate of the city, which is by the fountain of Panops, I fell in with Hippothales, the son of Hieronymus, and Ctesippus the Paeanian, and a company of young men who were standing with them. Hippothales, seeing me approach, asked whence I came and whither I was going. I am going, I replied, from the Academy straight to the Lyceum. Then come straight to us, he said, and put in here; you may as well. Who are you, I said; and where am I to come? He showed me an enclosed space and an open door over against the wall. And there, he said, is the building at which we all meet: and a goodly company we are. And what is this building, I asked; and what sort of entertainment have you? The building, he replied, is a newly erected Palaestra; and the entertainment is generally conversation, to which you are welcome. Thank you, I said; and is there any teacher there? Yes, he said, your old friend and admirer, Miccus. Indeed, I replied; he is a very eminent professor. Are you disposed, he said, to go with me and see them? Yes, I said; but I should like to know first, what is expected of me, and who is the favourite among you? Some persons have one favourite, Socrates, and some another, he said. And who is yours? I asked: tell me that, Hippothales. At this he blushed; and I said to him, O Hippothales, thou son of Hieronymus! do not say that you are, or that you are not, in love; the 88
zurück zum  Buch The Complete Plato"
The Complete Plato