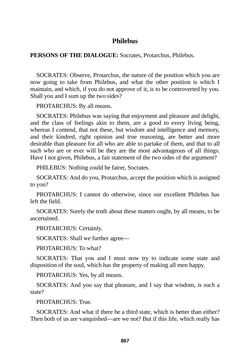 Philebus PERSONS OF THE DIALOGUE: Socrates, Protarchus, Philebus. SOCRATES: Observe, Protarchus, the nature of the position which you are now going to take from Philebus, and what the other position is which I maintain, and which, if you do not approve of it, is to be controverted by you. Shall you and I sum up the two sides? PROTARCHUS: By all means. SOCRATES: Philebus was saying that enjoyment and pleasure and delight, and the class of feelings akin to them, are a good to every living being, whereas I contend, that not these, but wisdom and intelligence and memory, and their kindred, right opinion and true reasoning, are better and more desirable than pleasure for all who are able to partake of them, and that to all such who are or ever will be they are the most advantageous of all things. Have I not given, Philebus, a fair statement of the two sides of the argument? PHILEBUS: Nothing could be fairer, Socrates. SOCRATES: And do you, Protarchus, accept the position which is assigned to you? PROTARCHUS: I cannot do otherwise, since our excellent Philebus has left the field. SOCRATES: Surely the truth about these matters ought, by all means, to be ascertained. PROTARCHUS: Certainly. SOCRATES: Shall we further agree— PROTARCHUS: To what? SOCRATES: That you and I must now try to indicate some state and disposition of the soul, which has the property of making all men happy. PROTARCHUS: Yes, by all means. SOCRATES: And you say that pleasure, and I say that wisdom, is such a state? PROTARCHUS: True. SOCRATES: And what if there be a third state, which is better than either? Then both of us are vanquished—are we not? But if this life, which really has 867
zurück zum  Buch The Complete Plato"
The Complete Plato