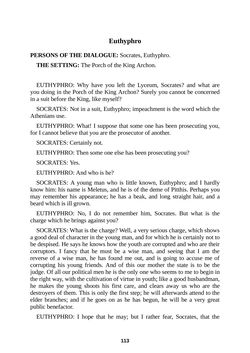 Euthyphro PERSONS OF THE DIALOGUE: Socrates, Euthyphro. THE SETTING: The Porch of the King Archon. EUTHYPHRO: Why have you left the Lyceum, Socrates? and what are you doing in the Porch of the King Archon? Surely you cannot be concerned in a suit before the King, like myself? SOCRATES: Not in a suit, Euthyphro; impeachment is the word which the Athenians use. EUTHYPHRO: What! I suppose that some one has been prosecuting you, for I cannot believe that you are the prosecutor of another. SOCRATES: Certainly not. EUTHYPHRO: Then some one else has been prosecuting you? SOCRATES: Yes. EUTHYPHRO: And who is he? SOCRATES: A young man who is little known, Euthyphro; and I hardly know him: his name is Meletus, and he is of the deme of Pitthis. Perhaps you may remember his appearance; he has a beak, and long straight hair, and a beard which is ill grown. EUTHYPHRO: No, I do not remember him, Socrates. But what is the charge which he brings against you? SOCRATES: What is the charge? Well, a very serious charge, which shows a good deal of character in the young man, and for which he is certainly not to be despised. He says he knows how the youth are corrupted and who are their corruptors. I fancy that he must be a wise man, and seeing that I am the reverse of a wise man, he has found me out, and is going to accuse me of corrupting his young friends. And of this our mother the state is to be the judge. Of all our political men he is the only one who seems to me to begin in the right way, with the cultivation of virtue in youth; like a good husbandman, he makes the young shoots his first care, and clears away us who are the destroyers of them. This is only the first step; he will afterwards attend to the elder branches; and if he goes on as he has begun, he will be a very great public benefactor. EUTHYPHRO: I hope that he may; but I rather fear, Socrates, that the 113
zurück zum  Buch The Complete Plato"
The Complete Plato