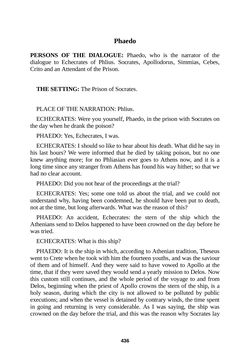 Phaedo PERSONS OF THE DIALOGUE: Phaedo, who is the narrator of the dialogue to Echecrates of Phlius. Socrates, Apollodorus, Simmias, Cebes, Crito and an Attendant of the Prison. THE SETTING: The Prison of Socrates. PLACE OF THE NARRATION: Phlius. ECHECRATES: Were you yourself, Phaedo, in the prison with Socrates on the day when he drank the poison? PHAEDO: Yes, Echecrates, I was. ECHECRATES: I should so like to hear about his death. What did he say in his last hours? We were informed that he died by taking poison, but no one knew anything more; for no Phliasian ever goes to Athens now, and it is a long time since any stranger from Athens has found his way hither; so that we had no clear account. PHAEDO: Did you not hear of the proceedings at the trial? ECHECRATES: Yes; some one told us about the trial, and we could not understand why, having been condemned, he should have been put to death, not at the time, but long afterwards. What was the reason of this? PHAEDO: An accident, Echecrates: the stern of the ship which the Athenians send to Delos happened to have been crowned on the day before he was tried. ECHECRATES: What is this ship? PHAEDO: It is the ship in which, according to Athenian tradition, Theseus went to Crete when he took with him the fourteen youths, and was the saviour of them and of himself. And they were said to have vowed to Apollo at the time, that if they were saved they would send a yearly mission to Delos. Now this custom still continues, and the whole period of the voyage to and from Delos, beginning when the priest of Apollo crowns the stern of the ship, is a holy season, during which the city is not allowed to be polluted by public executions; and when the vessel is detained by contrary winds, the time spent in going and returning is very considerable. As I was saying, the ship was crowned on the day before the trial, and this was the reason why Socrates lay 436
zurück zum  Buch The Complete Plato"
The Complete Plato