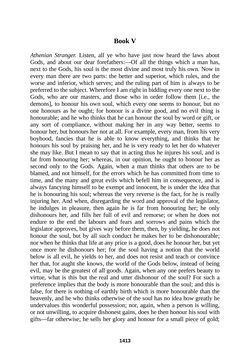 Book V Athenian Stranger. Listen, all ye who have just now heard the laws about Gods, and about our dear forefathers:—Of all the things which a man has, next to the Gods, his soul is the most divine and most truly his own. Now in every man there are two parts: the better and superior, which rules, and the worse and inferior, which serves; and the ruling part of him is always to be preferred to the subject. Wherefore I am right in bidding every one next to the Gods, who are our masters, and those who in order follow them [i.e., the demons], to honour his own soul, which every one seems to honour, but no one honours as he ought; for honour is a divine good, and no evil thing is honourable; and he who thinks that he can honour the soul by word or gift, or any sort of compliance, without making her in any way better, seems to honour her, but honours her not at all. For example, every man, from his very boyhood, fancies that he is able to know everything, and thinks that he honours his soul by praising her, and he is very ready to let her do whatever she may like. But I mean to say that in acting thus he injures his soul, and is far from honouring her; whereas, in our opinion, he ought to honour her as second only to the Gods. Again, when a man thinks that others are to be blamed, and not himself, for the errors which he has committed from time to time, and the many and great evils which befell him in consequence, and is always fancying himself to be exempt and innocent, he is under the idea that he is honouring his soul; whereas the very reverse is the fact, for he is really injuring her. And when, disregarding the word and approval of the legislator, he indulges in pleasure, then again he is far from honouring her; he only dishonours her, and fills her full of evil and remorse; or when he does not endure to the end the labours and fears and sorrows and pains which the legislator approves, but gives way before them, then, by yielding, he does not honour the soul, but by all such conduct he makes her to be dishonourable; nor when he thinks that life at any price is a good, does he honour her, but yet once more he dishonours her; for the soul having a notion that the world below is all evil, he yields to her, and does not resist and teach or convince her that, for aught she knows, the world of the Gods below, instead of being evil, may be the greatest of all goods. Again, when any one prefers beauty to virtue, what is this but the real and utter dishonour of the soul? For such a preference implies that the body is more honourable than the soul; and this is false, for there is nothing of earthly birth which is more honourable than the heavenly, and he who thinks otherwise of the soul has no idea how greatly he undervalues this wonderful possession; nor, again, when a person is willing, or not unwilling, to acquire dishonest gains, does he then honour his soul with gifts—far otherwise; he sells her glory and honour for a small piece of gold; 1413
zurück zum  Buch The Complete Plato"
The Complete Plato