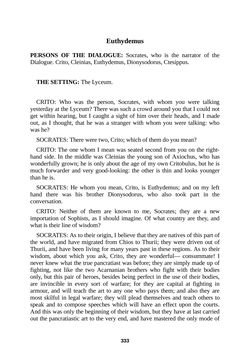 Euthydemus PERSONS OF THE DIALOGUE: Socrates, who is the narrator of the Dialogue. Crito, Cleinias, Euthydemus, Dionysodorus, Ctesippus. THE SETTING: The Lyceum. CRITO: Who was the person, Socrates, with whom you were talking yesterday at the Lyceum? There was such a crowd around you that I could not get within hearing, but I caught a sight of him over their heads, and I made out, as I thought, that he was a stranger with whom you were talking: who was he? SOCRATES: There were two, Crito; which of them do you mean? CRITO: The one whom I mean was seated second from you on the right- hand side. In the middle was Cleinias the young son of Axiochus, who has wonderfully grown; he is only about the age of my own Critobulus, but he is much forwarder and very good-looking: the other is thin and looks younger than he is. SOCRATES: He whom you mean, Crito, is Euthydemus; and on my left hand there was his brother Dionysodorus, who also took part in the conversation. CRITO: Neither of them are known to me, Socrates; they are a new importation of Sophists, as I should imagine. Of what country are they, and what is their line of wisdom? SOCRATES: As to their origin, I believe that they are natives of this part of the world, and have migrated from Chios to Thurii; they were driven out of Thurii, and have been living for many years past in these regions. As to their wisdom, about which you ask, Crito, they are wonderful— consummate! I never knew what the true pancratiast was before; they are simply made up of fighting, not like the two Acarnanian brothers who fight with their bodies only, but this pair of heroes, besides being perfect in the use of their bodies, are invincible in every sort of warfare; for they are capital at fighting in armour, and will teach the art to any one who pays them; and also they are most skilful in legal warfare; they will plead themselves and teach others to speak and to compose speeches which will have an effect upon the courts. And this was only the beginning of their wisdom, but they have at last carried out the pancratiastic art to the very end, and have mastered the only mode of 333
zurück zum  Buch The Complete Plato"
The Complete Plato