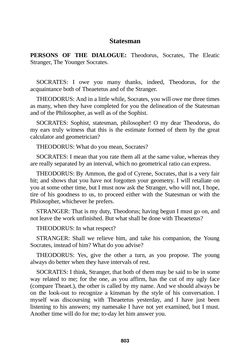 Statesman PERSONS OF THE DIALOGUE: Theodorus, Socrates, The Eleatic Stranger, The Younger Socrates. SOCRATES: I owe you many thanks, indeed, Theodorus, for the acquaintance both of Theaetetus and of the Stranger. THEODORUS: And in a little while, Socrates, you will owe me three times as many, when they have completed for you the delineation of the Statesman and of the Philosopher, as well as of the Sophist. SOCRATES: Sophist, statesman, philosopher! O my dear Theodorus, do my ears truly witness that this is the estimate formed of them by the great calculator and geometrician? THEODORUS: What do you mean, Socrates? SOCRATES: I mean that you rate them all at the same value, whereas they are really separated by an interval, which no geometrical ratio can express. THEODORUS: By Ammon, the god of Cyrene, Socrates, that is a very fair hit; and shows that you have not forgotten your geometry. I will retaliate on you at some other time, but I must now ask the Stranger, who will not, I hope, tire of his goodness to us, to proceed either with the Statesman or with the Philosopher, whichever he prefers. STRANGER: That is my duty, Theodorus; having begun I must go on, and not leave the work unfinished. But what shall be done with Theaetetus? THEODORUS: In what respect? STRANGER: Shall we relieve him, and take his companion, the Young Socrates, instead of him? What do you advise? THEODORUS: Yes, give the other a turn, as you propose. The young always do better when they have intervals of rest. SOCRATES: I think, Stranger, that both of them may be said to be in some way related to me; for the one, as you affirm, has the cut of my ugly face (compare Theaet.), the other is called by my name. And we should always be on the look-out to recognize a kinsman by the style of his conversation. I myself was discoursing with Theaetetus yesterday, and I have just been listening to his answers; my namesake I have not yet examined, but I must. Another time will do for me; to-day let him answer you. 803
zurück zum  Buch The Complete Plato"
The Complete Plato